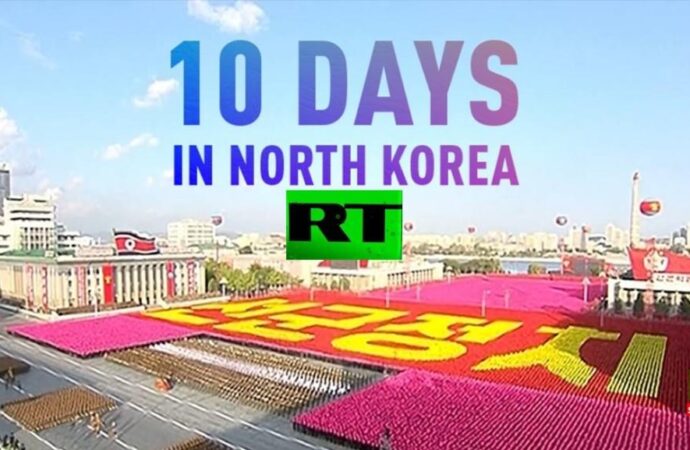 Communism Branded as Socialism – Posted to give our viewers a sneak preview of life under a communist dictator & a reminder why we fight. Note the lack of freedom of expression on camera

Welcome to North Korea where you have to follow your guide’s instructions and only take pictures of what we say. To some the people are repressed, though they prefer to describe themselves as “protected”, at least on camera. Life here is the result of a unique 70 year social experiment in which the people are “shielded” from the “corrupting influence” of the outside world. Few are ever allowed to travel abroad, use the internet or even see foreign films, music or media.

The country’s dynastic leader, Marshal Kim Jong-un, who inherited the job from his father and grandfather, continues their political heritage. They are still worshiped long after their deaths. An RT film crew was granted rare access to this unique country, which to many, seems to have leaped from the pages of a dystopian novel, to see first-hand what life is really like and what the people really think of their homeland and its leader.

The Democratic People’s Republic of Korea is perhaps the least known country in the world today. Based on a political ideology known as ‘Juche’, the socialist government controls every source of information and the national leader, Kim Jong-un, preserves the peace and defends the state’s historical, spiritual and cultural heritage.

It’s hard to overestimate the Commander-in-chief’s role in the country: his likeness adorns the streets and squares in every city and village. Through official portraits and statues, he is, literally, everywhere and kindergarten children are taught to sing his praises. Locals adore Kim Jong-un and consider him the Father of the Nation, he encourages everyone to be patriotic and surpass all other nations.

Almost 15% of North Korea’s GDP is reserved for military spending, and long after the Korean War of the 1950s, the country has still not signed a peace treaty with its capitalist southern neighbor. As a result, thousands of families were torn apart by the political divide. The army remains a source of inspiration; it determinates the social structure and stimulates ordinary people to devote their lives to work in the faithful service of the Marshal. The people believe that this military ideology consolidates national spirit and guarantees stability and order.

However, not even tough military methods and an ideological barrier around the country can solve the economic lag or the enormous social and economic gulf between South and North Korea. Self-reliance and self-sufficiency are in stark contrast to the economic reality. Despite developments in labour cooperation, a demilitarized zone, demarcated by a huge wall between the two states, is still amongst the most heavily armed areas in the world.

President of the Korean Friendship Association, Alejandro Cao de Benos explains that due to the generally accepted ideology of the Workers’ Party of Korea, the people will never understand nor accept a western mind-set. From childhood, they are taught to be loyal to their leader and to beware of western values.

For most viewers North Korea remains a mystery but this unique film offers a limited window of opportunity to view Korean lifestyle through the prism of North Korean peoples’ every day cares and joys. RT Doc meets ordinary workers and soldiers to hear first hand, how they lived before being isolated from the whole world.