Climate change is not driving U.S. wildfires – Government mismanagement is to blame 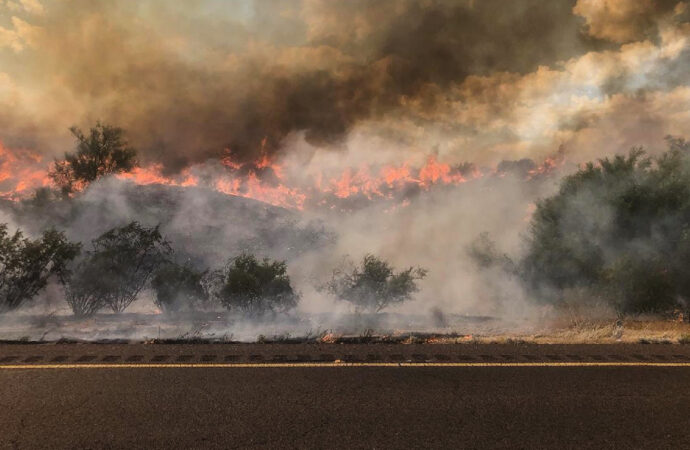 IN late July, President Joe Biden held a virtual joint planning meeting and press conference with the governors of various Western states to discuss how to handle 2021’s wildfire season.Every leader blamed catastrophic human climate change for the severity of recent wildfire seasons. The New York Times allowed Oregon’s Democratic Governor Kate Brown to follow up that event with an editorial titled ‘The West Is on Fire, It’s Past Time to Act on Climate Change’.

Biden and the governors are wrong.

Wildfires have been common throughout the West historically, often burning more acres than they’ve burned in recent years. But why have wildfires recently increased in intensity? It’s not due to modest warming, but rather to decades of Federal and State mismanagement of publicly-owned forests throughout the Western United States, leaving those forests in tinderbox conditions. It has been more than a century since California experienced wildfires of the magnitude it has suffered recently. But research published in Forest Ecology and Management reported that prior to European colonisation, more than 4.4 million acres of California forest and shrub-land burned annually. And those huge wildfires came when the Earth was cooler than it is today.

Had Brown studied history, she would have found Oregon has suffered large fires throughout its history.

As detailed in an article sponsored by Oregon’s Department of Forestry: “Prior to Euro-American settlement large, stand-replacing crown fires burned Pacific Northwest coastal forests every 200–500 years. Smaller surface fires revisited dry interior forests as often as every 4–20 years. West-side Cascade wildfire intervals and intensity fell somewhere in the range between.”This changed with the arrival of Euro-American settlers in the West, who stopped the regular burning both to deny Native Americans of their traditional lifestyles and food production system and to prevent fires from burning newly settled towns and farms.

Forests grew thicker as a result. With the rise of widespread Federal and State ownership of forests in the west, management with the axe, firehose, firebreaks and roads replaced regular widespread forest fires. For nearly 80 years the U.S. Forest Service, an agency within the Department of Agriculture, drove thousands of miles of roads deep into the forests to allow logging. The roads also created artificial fire breaks and allowed access for firefighters into the backwoods to fight fires when they started, typically far from settled areas.In 1985, Oregon’s federal forests produced more than 4 billion board feet of timber annually.

By 1995, concerns about the spotted owl and a change in forest management philosophy from one of productive use to natural ecosystem management resulted in thousands of miles of forest roads being closed and ripped out. Soon thereafter, timber harvests plunged to less than 1 billion board feet per year. The same decline in logging and the destruction of forest roads was common throughout western public forests. This has resulted in overcrowded forests and the easier spread of insect infestations such as bark beetles, which have killed an untold number of trees. Many federal forests now contain more dead and dying timber than living trees and since loggers can no longer clear large areas of forests and firefighters can’t get to fires, except from the air if conditions are right, wildfires are on the rise again. Sadly, hundreds of towns, homes and businesses are being burned out.

With so much fuel, these fires are different. Rather than replenishing the soil, they burn so hot that they often kill key microbes in the soil. This leaves millions of acres of land denuded for decades, looking like moonscapes. Under the current federal policy of letting nature take its course, loggers usually can’t even get into burnt-over areas to clear fallen burnt timber and replant new trees in areas where, with human help, they might possibly take root and flourish.

So, for political reasons, Biden and the governors want to blame modest recent warming for the scope and intensity of wildfires in western states in 2020 and 2021. The true culprit is more than 30 years of forest mismanagement. Contrary to Biden’s and the governors’ assertions, State and Federal efforts to address racial disparities, increase electric vehicle usage and stop using fossil fuels to generate electricity will do nothing to prevent wildfires.

Wildfires are natural. They can’t be stopped. They can be managed. The damage they cause to the forests and the people living near them can be dramatically reduced.Wise management of forests is required, either through regular, widespread, low-intensity burning, as the Native Americans did, or through active forest management, including intensive logging, brush clearing and firefighting efforts, as governments did prior to 1990. These tools – not massive, misdirected spending on climate change – are the best hope of preventing Westerners’ lives and livelihoods from being consumed by flames.