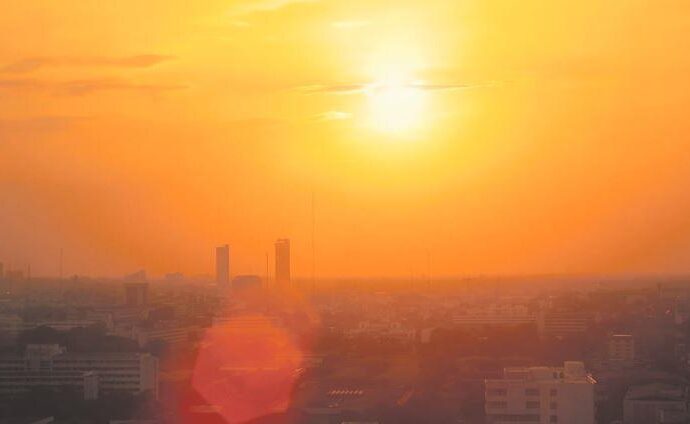 1. That the carbon dioxide resulting from fossil fuel use is the prime cause of the warming of the earth’s atmosphere and,

2. That we must abandon our use of fossil fuels by 2050, in a policy of Net Zero, or risk an accelerating and eventually uncontrollable overheating of the planet. Coe’s paper ‘The Impact of CO2, H2O and Other Greenhouse Gases on Equilibrium Earth Temperatures’ shows that the popular claims of carbon dioxide’s ability to influence the planet’s mean temperature have been grossly exaggerated, and are based on unsound science. Net Zero is therefore an overreaction, and a misconceived policy.

The scientific yardstick devised to measure the scale of this apparent threat is the ‘equilibrium climate sensitivity’, or ECS, meaning the increase in average global temperature caused by a doubling of the atmospheric CO2 concentration. However, no general agreement on this figure exists among the scientific community. Estimates of ECS throughout the years have varied widely between 1 and 6 degrees Centigrade, settling down at this moment to a band between 1.5 and 4.5°C, still a factor of three variation. Even the UK Met Office website acknowledges, “As there is no ‘perfect’ way of estimating climate sensitivity, it remains a hotly debated area of science and there remains a wide range of estimates of what the ECS could be.”Coe’s research takes a pure physics approach to calculating the greenhouse/heat absorbing capability of the atmosphere’s component gases, from their long established thermal properties. These have been precisely measured by laboratory spectral analysis at the Harvard & Smithsonian Centre for Astrophysics, whose ‘HITRAN Database’ is the repository for this information. CO2’s role in atmospheric warming has been exaggerated 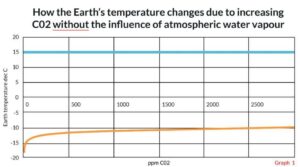 David applies this HITRAN data to a simplified model of the atmosphere and its interaction with solar radiation, but one where all the main influences are still taken into consideration. The end result is his finding that the ECS of CO2 is only 0.5°C, just one third of even the lowest figure within the currently accepted range, of 1.5 to 4.5°C per doubling. What does this imply?The graph to the left (Graph 1) is to illustrate the effect of carbon dioxide on its own, without the influence of any other gases. The orange line portrays the amount of warming which would occur if CO2 were the only greenhouse gas present. The blue line simply highlights the earth’s current mean temperature, of 15°C. 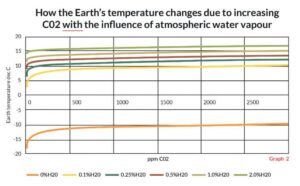 The vertical axis represents the earth’s mean temperature in degrees centigrade. The horizontal axis is a scale of atmospheric CO2 concentration in parts per million, ppm. Starting from the left,where there is zero CO2, the earth temperature is minus 18°C. In other words, without any ‘greenhouse warming’ the planet would be locked into a permanent ice age.

As the CO2 level begins to rise, along the horizontal axis towards today’s figure of 400ppm, the line curves upwards steeply, to produce about a 6°C rise in temperature for 400ppm of CO2. Note, it is still ice age cold, at -12°C. Further increases of CO2 produce steadily diminishing changes in temperature, shown by the gradual flattening of the curve. Even for a huge concentration of 3000ppm, at the right hand side of the graph, CO2 acting on its own increases the earth’s temperature from -18°C to only about -10°C. The reason we are not locked into such long term icy conditions is the influence of water vapour.

Water vapour and its overriding influenceThe effect of water vapour is now included to the original graph, as shown here. The orange CO2 only line is left in place. On Graph 2 (above), the data for water vapour is combined with that for CO2, taking account of the fact that their properties of heat absorption overlap somewhat. Various realistic assumptions are made, e.g. that nearly all the greenhouse warming occurs up to a height of 5000 metres. The cluster of lines, from yellow to green, represent different concentrations of water vapour, see the key below the graph.For approx. 1% of water vapour, which is about the average concentration in the atmosphere the effect on increasing levels of CO2 is represented by the light brown line. For the current level of CO2 at around 400ppm, the earth’s mean temperature has increased from minus 10°C to plus 15°C, which we now experience.

This line shows how the earth’s temperature then varies according to the amount of CO2, from zero to 3000ppm. The other coloured lines in the cluster show what happens for other percentages of water vapour. It is the water vapour which lifts the mean temperature by 25°C, plus or minus. But after this H2O surge, variations in CO2 levels produce only a very limited influence on the mean earth temperature. The overriding influence here is the water vapour, not the CO2.

At today’s concentration of around 400ppm of CO2, Coe’s calculations show that, ignoring for a moment the effect of minority gases, water vapour accounts for 92.3% of the greenhouse heating effect, while the figure for carbon dioxide is just 7.7%. It is water vapour which is doing the ‘heavy lifting’ in our atmosphere and giving us our habitable climate. CO2 is a relatively minor player in influencing the mean planetary temperature.The ‘elephant in the room’ of the climate debate is the scientific fact that atmospheric water vapour holds around 12 times as much heat as carbon dioxide.

And what of the warming contributions of those minority gases? Methane, CH4, and nitrous oxide, N2O, are popularly cited. Using similar calculations, again based on the HITRAN data, their ECS, concentration-doubling effects, amount to only 0.06°C and 0.08°C, respectively. These are very small compared to that figure of 0.5°C for carbon dioxide, and taken together represent only 0.4% of the overall greenhouse effect at current concentrations. The minority gases may therefore be considered insignificant contributors to atmospheric warming, Coe concludes.

Bearing in mind that there is almost no water vapour above a height of 10,000 metres and that temperature diminishes with altitude, the mathematics involves the summation of an algebraic series, which is detailed in the full paper… these calculations are not for the fainthearted. Happily, the outcome of this calculation is to introduce only a simple multiplying factor, of 1.183. Water vapour feedback results in just a small additional increase of a fraction of a degree, depending on the vapour pressure/humidity level. Looked at in terms of the ECS value, atmospheric water vapour increases the CO2 climate sensitivity slightly from 0.45°C to 0.5°C, and any ‘runaway overheating’ is shown to be impossible.

The targets of Net Zero, and 1.5°C warming limit, are pointless.

Climate campaigners, and all those pushing for the Net Zero target, have identified one particular goal, to keep further temperature rises below 1.5°C. According to Coe’s research, if this increase were to be caused by the increase of CO2 in the atmosphere three concentration doublings would be required, each one raising the temperature by 0.5°C. To achieve this, the current level of CO2 of 400ppm would need to double to 800ppm, and then again to 1600ppm and then again once more to 3200ppm. So, how long would this temperature rise take?

A quick look at the Scripps Institute, Mauna Loa graph, shows that CO2 is increasing at an approximate rate of 240ppm per 100 years. The increase from the current 400ppm to 3200ppm is a figure of 2800ppm. Assuming a continuation of the same rate of increase, the time needed to reach a further 2800ppm and a 1.5°C warming would be just over 1300 years.

Looking back at the past 1300 years, the planet has experienced both the ‘Medieval Warm Period’ and ‘The Little Ice Age’. Who is to say similar massive climate changes, due entirely to natural causes, will not be repeated while the very gentle warming influence of CO2 is continuing? Our current condition is hardly a crisis, and the frantic attempts to eliminate fossil fuel use are of highly dubious significance.