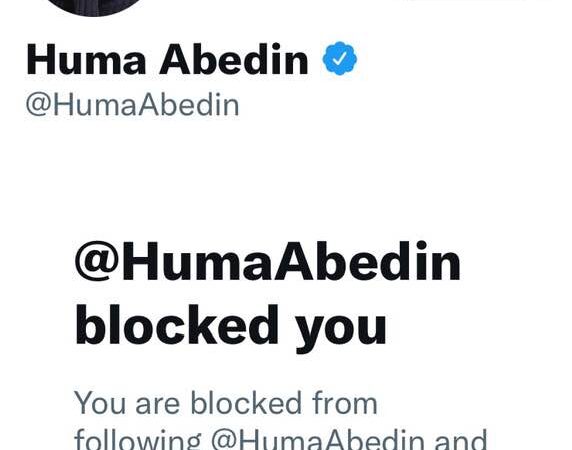 We were prompted to follow Huma, I did that and ended up being blocked by her on Twitter. (Me and my big mouth)

I woke up today to a news story from New Times India , who are reporting that one of the lead characters of the Frazzledrip video Huma Abedin, was celebrated by a host of stars yesterday.

As Hillary Clinton’s right-hand adviser for 25 years. She was 20 years old and a student at GWU when she started working as an intern at the White House in 1996.

Abedin was at Clinton’s side as first lady, senator, secretary of state and presidential candidate.

She married Rep. Anthony Weiner, D-N.Y. – in a 2010 ceremony officiated by Bill Clinton and covered by Vogue.

Weiner, a man involved with the sexting scandal that seeped into the 2016 presidential campaign.

I am sure most reading this blog know of this woman’s crimes.  So why am I giving this evil bitch space on Liberty Tactics.

17 advised anons to follow Huma.  It  is very interesting that she has yet again raised her evil head on to social networks.  She was a very busy tweeter back in the days pre Trump but disappeared in September of 2016, shortly after the election (Hmm wonder why ?)

She popped back up on Jan 6th of this year (fake inauguration day), only a couple of tweets over the following months. October this year is when she fully returned to social media.

Lets follow this bitchs tweets and keep an eye out for the arrest of Podesta, which I predict will be coming very, very soon.