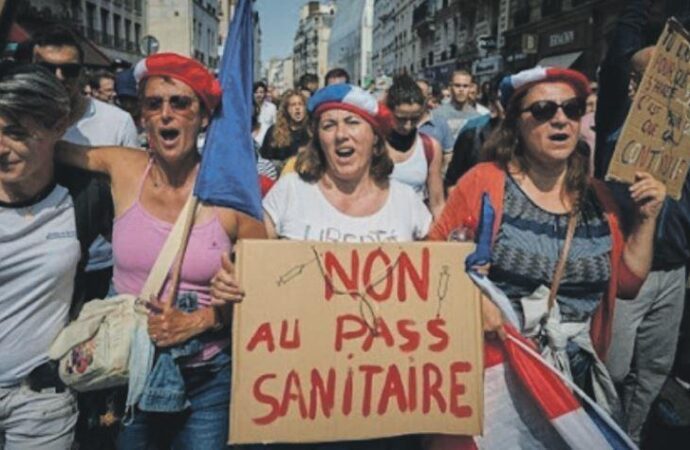 ON July 13, President Macron announced that the health pass would become mandatory, and indeed since August 9, either full vaccination or a negative test are needed for adults to attend:

The pass can also be demanded for any leisure activities.

Since August. 30, it is required for all employees working in the above places. From September 30, it will be required for 12-17 year olds. The pressure of losing their jobs is such that millions have accepted vaccination out of fear. The police are exempt, but nonetheless, seemingly above 80% have opted for the shots.

Following the announcement, a wave of resistance has risen, first on the internet, then on the streets. It is like a new wind rising, a wind of peace, of hope, of humanity coming together. Never before in my life have I seen such a large mobilisation. Each Saturday, relentlessly, some 6.5 million people across the country are marching against the mandatory pass, marching for freedom, marching against the materialist society we live in. They know protests are of little effect, but they attend to show presence, to show ‘we – the people- are here’ and to lift their spirits in dark times, knowing they are not alone in their refusal to comply.

Since the end of August, families have come out in their thousands across France to eat in front of restaurants where the health pass is demanded from people. Mass non-compliance is always the best way to defeat tyranny.

It is now a 6 Month prison sentence if you are caught inside any of these places without the ‘health’ pass. Business owners will get a fine of 45,000 euros and 1 year prison sentence if they do not comply with the use of “the pass” and force all their employees to get the shot.

As of last week ALL doctors, nurses and health industry workers have been mandated to get injected or lose their license, practice, job or business – all health care here is Govt paid positions and there are no private health care Doctors or Hospitals.

As of Sept 15th , all public areas and access will be off limits. No farmers markets, no parks, no national parks, lakes, rivers, beaches, recreation areas or campsites, and no gathering over 100 people, no churches, no weddings, funerals and so on.

As of Oct 1st all small vendors such as, delis, pizza trucks, sandwich shops, butchers, bakers, vegetable stands will be off-limits to those not wanting to take part in the mRNA drug trials.

So as of Oct 1st I will only be able to purchase food by internet and pick up (if allowed).

Food shortages, Truckers strikes, hospitals and airports shutting down, unemployment going through the roof. It’s going to be a bumpy ride, folks. Whatever happens, history is being written.