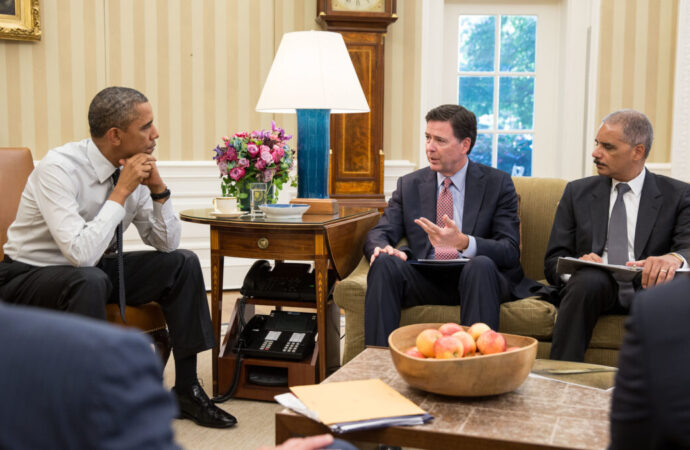 Brian Cates comments on the below story

The Sussmann Defense focused like a LASER on the one line in the 3 sets of notes they wanted to use for his defense at trial while they completely missed how those same notes show some people inside the FBI misleading the DOJ about Crossfire Hurricane and Crossfire Razor.

THESE PEOPLE ARE STUPID.

Now Durham gets to use the notes to go after the FBI people involved.

Just like everybody missed the real import of Fine’s testimony on the first day, until it was pointed out she was the person Fusion and Perkins Coie would’ve been briefing on all the ALFA BANK LEGAL ISSUES, and she testified that NOBODY EVER DISCUSSED IT WITH HER…

none of these lawyers on Sussmann’s team realized what they were putting out there into the public sphere by introducing these notes into the trial evidence.

I would love to have seen Durham’s face when he saw Sussmann’s team was going for it, asking to put the notes in front of the jury.

Hillary Clinton’s campaign lawyer Michael Sussmann is currently on trial for lying to the FBI about his role in pushing data pertaining to alleged communications between Trump and the Russian Alfa Bank. According to Special Counsel John Durham, Sussmann lied when he brought that data to the FBI’s General Counsel James Baker as part of the Clinton campaign’s efforts to trigger an FBI investigation of her opponent, Donald Trump. Specifically, Sussmann allegedly wrote Baker a text message claiming he was not representing anyone in providing the information when, in fact, he was representing the Clinton campaign.

While the notes contain a one-line hearsay suggestion that may cast doubt on Sussmann’s earlier claim that he was not representing anyone, their broader significance lies in what they reveal about the FBI’s strategy in the months leading up to the appointment of Special Counsel Robert Mueller in May 2017.

In fact, the notes are the very first documents to have been released to the public that show what the FBI was telling the DOJ about the predication and status of the FBI’s Crossfire Hurricane investigation only two weeks before FBI Director James Comey’s shock announcement to the House Intelligence Committee on March 20, 2017, that the Trump campaign was being investigated by the FBI for ties to the Kremlin. It was Comey’s announcement that ultimately led to the appointment of Mueller.

The FBI was represented at the meeting by three of its top officials: Deputy Director Andy McCabe, Counterintelligence Executive Assistant Director Bill Priestap, and Counterintelligence Deputy Assistant Director Peter Strzok. The DOJ was also represented by top-level officials, led by Acting Attorney General Dana Boente. Boente was taking the place of Attorney General Jeff Sessions, who had recused himself only four days previously.

The significance of the FBI’s lies was accentuated this week at Sussmann’s trial when Scott Hellman, an FBI cyber analyst, testified that he knew right away in September 2016 that Sussmann’s data did not suggest any covert communications between Trump and Russia. Hellman added that he wondered if the person who put together the data was suffering from a mental disability.

Hellman’s testimony is the clearest evidence yet that the FBI knew from the start that one of the two major components of the Trump Russia collusion narrative – the Alfa Bank data – was false. As the March 6 notes show, they concealed this fact from their DOJ superiors.