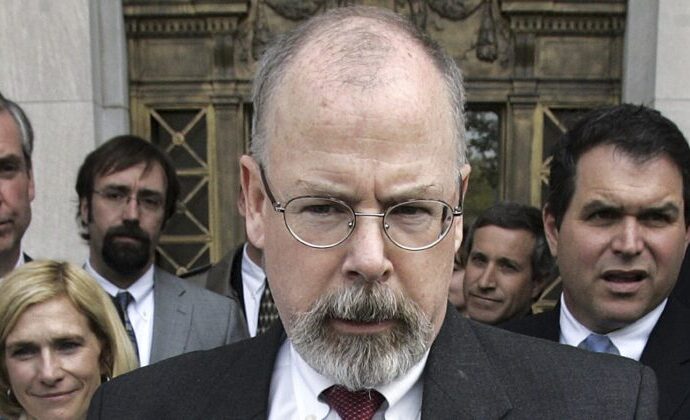 The lawyer was indicted (pdf) on a single felony count of making a false statement during a meeting with FBI General Counsel James Baker in September 2016. Prosecutors allege that Sussmann lied by denying he represented any client when he told the federal law enforcement agency about evidence that allegedly linked then-candidate Donald Trump’s Trump Tower to a bank in Russia.

Sussmann met with Baker to hand over papers and data files containing evidence of the alleged link between the Trump Organization and the Russian bank, which wasn’t disclosed. Unconfirmed media reports have stated that it was Alfa Bank.

The indictment is the second criminal case brought by Durham since he was named by former Attorney General William Barr in 2018 to investigate officials who investigated the Trump–Russia probe. Durham, a former U.S. attorney, was asked to stay as a special counsel and continue his investigation after President Joe Biden’s administration took office in January.

Sussmann, the indictment alleges, didn’t turn over the information as a “good citizen,” but rather as an attorney representing Clinton, a technology executive, and an internet company.

“Sussmann’s lie was material because, among other reasons, Sussmann’s false statement misled the FBI General Counsel and other FBI personnel concerning the political nature of his work and deprived the FBI of information that might have permitted it more fully to assess and uncover the origins of the relevant data and technical analysis,” the indictment reads.

The Epoch Times in 2019 found that Sussmann had provided the information to Baker and at least one journalist ahead of the FBI’s application for a FISA warrant to surveil former Trump campaign aide Carter Page. Perkins Coie, on behalf of the Democratic National Committee, also hired Fusion GPS, which in turn hired Christopher Steele to produce the dossier that contained since-discredited claims against the former president.

About a month later, The New York Times and other news outlets reported on the FBI investigation into the alleged Alfa Bank–Trump Organization connection. The FBI said it looked into the matter, but found no connections.

Trump and other former administration officials have long described the FBI investigation into his campaign as a witch hunt designed to politically wound his reelection chances.

Lawyers for Sussman, a former federal prosecutor, said on Sept. 16 that their client never made false statements to the FBI and that there’s no evidence that the alleged falsehood affected the agency’s work.

“Mr. Sussmann has committed no crime,” they said in a statement, according to The Associated Press. “Any prosecution here would be baseless, unprecedented, and an unwarranted deviation from the apolitical and principled way in which the Department of Justice is supposed to do its work.”

In 2017, Sussmann was asked by congressional investigators about his interview with Baker and testified that he passed along information on behalf of his client.

When trying to access Sussmann’s page on Perkins Coie’s website, a “page not found” message was displayed.

Representatives for Perkins Coie and Sussmann’s lawyers didn’t respond to requests for comment by press time.