Kash Patel: Durham Laying Out Broader Scope of Corruption In 2016 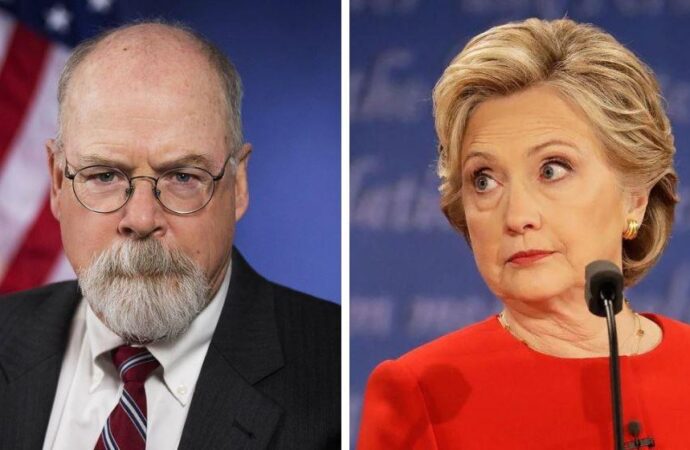 During an interview on Fox News, Patel spoke about Durham’s probe into the handling of the Trump-Russia investigation and whether Hillary Clinton’s campaign had any involvement in pushing false information to harm Trump and his campaign.

Patel argued that the first indictment from Durham is laying out a broader explanation of corruption in efforts to funnel information to the FBI in 2016.

“The John Durham indictment against Michael Sussman for lying to the FBI is normally about 2-3 pages long at max,” Patel said. “A 27-page indictment is reserved for those mob-style conspiracy cases or large scale fraud cases that the Department of Justice brings.”

“What I believe John Durham is doing is laying out a sweeping indictment so that the American public can begin to understand what the corruption was and who exactly was involved,” he said.

“What [former FBI Director James Comey] should have been investigating was the collusion links between the Democratic Party, the Hillary Clinton campaign, and the [Democratic National Committee] to funnel this information into the FBI, fraudulently so, and now it’s coming to light,” he continued.

“America’s finally starting to see the truth of what happened behind this indictment,” he declared.

“The one thing that doesn’t lie is bank records and money records, and that’s what John Durham is basing his conspiracy investigation on because he cited eight other individuals, not by name,” Patel said.

“John Durham’s only in his second year of the most political scandal in U.S. history, so I believe in the next six months, look out for indictments for folks like [former Wall Street Journal reporter] Glenn Simpson, [and FBI agents] Lisa Page and Peter Strzok, he said. “I believe they’re cooperating with him. I think you’re going to see these indictments start coming out on the individuals at the top, it’s just going to take a few more months.”

Durham has indicted a prominent lawyer who worked for the Democratic National Committee and Hillary Clinton’s 2016 presidential campaign.

Michael Sussmann was indicted for allegedly lying to FBI lawyer James Baker during a 2016 meeting about who he was representing when he gave information about Donald Trump and Russia to the bureau.

At this meeting, Sussman reportedly relayed to the FBI the discredited theory that the Trump Organization was communicating with Alfa Bank.

“Any indictment of the lawyer — Michael Sussmann, a former federal prosecutor and now a partner at the Perkins Coie law firm, and who represented the Democratic National Committee on issues related to Russia’s 2016 hacking of its servers — is likely to attract significant political attention, the New York Times reported.

The NYT states: “Mr. Baker, the former F.B.I. lawyer, is said to have told investigators that he recalled Mr. Sussmann saying that he was not meeting him on behalf of any client.”

Sussman told a different story with his testimony to Congress and his own billing records.

Sussman’s lawyers have even acknowledged “they expected him to be indicted.”

Back in 2020, Durham impaneled a grand jury relating to the false Alfa Bank/Trump Organization story.

NEW: Prosecutor John Durham has told a cyber lawyer — who works for the firm that repped Clinton campaign — that he wants to indict him on suspicion of lying about who he repped when he told F.B.I. in '16 about potential ties b/w Trump and Russia. https://t.co/KiSUIeGuzh

Durham is presenting evidence to a grand jury regarding his investigation into the origins of the Trump-Russia investigation.

Republican Rep. Devin Nunes, the ranking member of the House Intelligence Committee, argued a month ago that he expects Durham to release a “damaging report” on the FBI’s failed investigation into Donald Trump’s alleged ties with Russia.