Meanwhile In Sri Lanka – No Food, No Oil and No Prime Minister 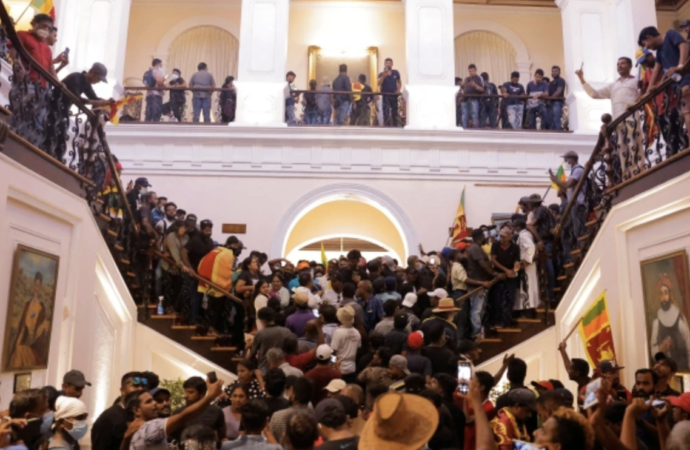 Sri Lanka has fallen in to total despair.  Whilst our government is sending millions to Ukraine to help the deep state Nazis, the 21,595,643 million people of Sri Lanka have been cut off from the world with, no food, no energy and no health care .  And one must ask, where are the mainstream media? Where are all the world leaders pledging aid for Sri Lanka?

A piece in the Lanka Times reports as follows

“Leaving aside the global crisis as a result of the Ukraine-Russia conflict. Sri Lanka’s Govt is doing a pretty good job adding to the crisis. Is there any truth in the allegation that the government has created the energy crisis for the kickbacks and commissions taken by politicians, public officials and their cronies?

Much of our internal problems can be addressed if the kickbacks, commissions and other deals are stopped and the artificially created ‘shortage’ would no longer exist.  Sri Lanka will not be cornered by the IMF and the structural adjustments, which invariably hit the general masses and not the elite.

Therefore, the Government should be pressed to answer, if the fuel crisis is a created one?  Resulting in people being pressed to suffer & justifying deals” which an anxious public will accept because their only desire is to feed their families.

When Russia is offering fuel at a reduced price, a price even India has accepted & is purchasing. Sri Lanka doesn’t want to anger US and is buying fuel from India at a higher price, while India is buying from Russia at a discounted price. What is stopping Sri Lanka from going to Russia for our energy requirements? Are we a State of India or a US colony?

While we still await an answer, for whether the fuel crisis is an artificial one, it is emerging that the Ceylon Electricity Board is also a den of corruption. Electrical Engineers giving themselves exorbitant state salaries, perks, bonuses and overtime even during these crisis months. These public officials must be investigated and removed from positions before they cause bigger damage.

The same scenario prevails in Litro Gas though its new chairman Muditha Peiris has responded to allegations. Litro Gas Lanka is a subsidiary of the Sri Lanka Insurance Corporation. According to Muditha Pieris it spends less than 2% of annual turnover on salaries of less than 200 staff.  Majority of staff have over 20 years’ experience joining Litro from heritage Royal Shell Gas or Lanka Gas Co. In short Muditha Peiris is denying the salaries attributed to Litro senior staff. “

Today the people stormed the Prime Ministers residents, and he has supposedly fled the country, according to the latest news from Aljazeera.  Sri Lanka Prime Minister Ranil Wickremesinghe has, agreed to resign to make way for an all-party government amid protests at the president’s palace in Colombo.

Are we watching the systematic destruction of the old guard? I do believe so.

Pray for all the innocent people of Sri Lanka and keep the faith. GOD is in control and I do not think he will forsake them !