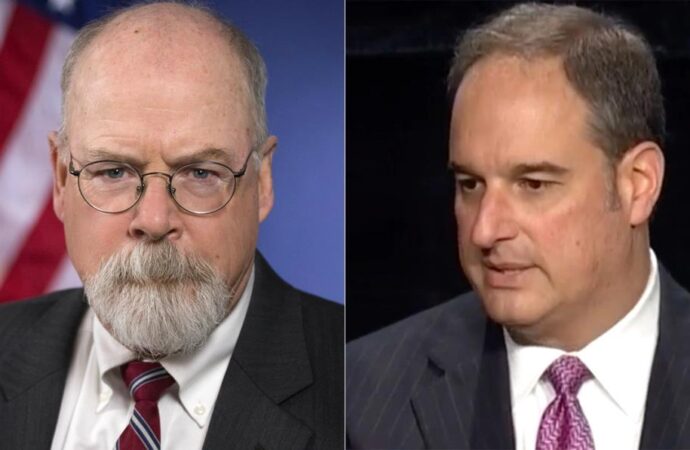 Kash Patel (Former Chief of Staff, Dept. of Defence – Former Deputy Assistant to Pres. Trump) breaks down the conspiracy in the following interview.

John Durham’s pleading shows there is no statute of limitations due to evidence before, during and after his indictments.

Durham isn’t granting anyone immunity. The pleadings were filed by Podesta, Perkins Coie, Fusion GPS and the Clinton Campaign to try and make Sussman the scapegoat.
This is their last ditch effort to block the information. They’re trying to hide behind attorney/client privilege. It won’t work because Durham has the emails.

The full interview is availible here

The United States of America, by and through its attorney, Special Counsel John H.
Durham, respectfully provides herein its Reply Concerning the Parties Motions in Limine and Rule
404(b) Objections. Rather than belabor a variety of issues that have been extensively discussed by
the parties, the Government makes three brief points that it believes are most salient.

I. A Joint Venture Plainly Existed Here
First, the defendant’s portrayal of the joint venture at issue as ill-defined, “[in]coherent,” and too “complicated” for a jury to understand is simply wrong. (Def. Br. at 19). Federal jury instructions have stated that in order to prove a conspiracy: the

Government is not required to show that two or more people sat around a table and entered into a solemn pact, orally or in writing, stating that they had formed a conspiracy [] and spelling out all of the details. . . . It is rare that a conspiracy can be proven by direct evidence of an explicit agreement.

But meeting to agree on the express goal of a joint venture is precisely what happened here, on more than one occasion. In particular, the evidence at trial will show that in or around June 2016, the individuals referred to in the Indictment as Tech Executive-1, Originator-1, and other researchers begin to discuss searching for and collecting derogatory internet data about the online activities of Donald Trump and his associates. Around this time,  Originator- 1 assembled and shared initial purported data with Tech Executive-1 (who, in turn, shared the data with the defendant).

In further support of the above, the Government expects the evidence will show, among other things, that:

II. Evidence Concerning the Assembling of the Russian Bank-1 Data and Allegations is Not Cumulative

Nor is evidence of this joint venture gratuitous or cumulative of other evidence. Indeed, the Government possesses only a handful of redacted emails between the defendant and Tech Executive-1 on these issues. And the defendant’s billing records pertaining to the Clinton Campaign, while incriminating, do not always specify the precise nature of the defendant’s work.

Accordingly, presenting communications between the defendant’s alleged clients and third parties regarding the aforementioned political research would hardly amount to a “mini-trial.” (Def.
Mot. at 20). Rather, these communications are among the most probative and revealing evidence that the Government will present to the jury. Other than the contents of privileged  communications themselves (which are of course not accessible to the Government or the jury), such communications will offer some of the most direct evidence on the ultimate question of whether the defendant lied in stating that he was not acting for any other clients. In short, because the Government here must prove the existence of client relationships that are themselves privileged, it is the surrounding events and communications involving these clients that offer the best proof of those relationships. Moreover, even if the Court were to find that no joint venture existed, all of the proffered communications are still admissible because, as set forth in the Government’s motions, they are not being offered to prove the truth of specific assertions. Rather, they are being offered to prove the existence of activities and relationships that led to, and culminated in, the defendant’s meeting with the FBI. Even more critically, the very existence of these written records – which laid bare the political nature of the exercise and the numerous doubts that the researchers had about the soundness of their conclusions – gave the defendant and his clients a compelling motive, separate and apart from the truth or falsity of the emails themselves, to conceal the identities of such clients and origins of the joint venture. Accordingly, they are not being offered for their truth and are not hearsay.

III. The Authors of the Relevant Emails Were Members of the Joint Venture

Finally, the defendant misunderstands the law of conspiracies and joint ventures when he claims that certain authors of the emails cited in the Indictment and the Government’s Motion were not members of the joint venture at all. (Def. Mot. at 20). For example, the defendant claims that “there is not evidence that the Researchers were working in concert with the Clinton Campaign or were even aware of the Campaign’s activities.” Id. at 20-21. But it is black-letter law in this Circuit that:

[i]t is enough ‘that members of the conspiracy in some way or manner, or through some contrivance, positively or tacitly[,] came to a mutual understanding to try to accomplish a common and
unlawful plan.’ Id. All coconspirators must share in the general conspiratorial objective, though they need not know all the details of the plan or even possess the same motives. Hobson, 737 F.2d at 51. They need not know the identities of other coconspirators. Id.

(holding that the party offering the evidence “do[es] not need to provide detailed connections between, for example, [a co-conspirator] and the defendant.”)

Thus, the researchers’ purported lack of knowledge concerning certain aspects of the conspiracy (or of other participants in it) is of absolutely no moment. Similarly, the defendant’s contention that certain statements by Researcher-1 are inadmissible because they “frustrate, rather than advance the purported joint venture” is wrong. That Researcher-1 ultimately expressed doubts about the conclusions Tech Executive-1 was seeking to advance does not in any way suggest that Researcher-1 was not a member of the joint venture to begin with. To the contrary, numerous emails make plain that Researcher-1 joined and participated in the venture to mine and analyze internet data in support of the desired “inference” and “narrative.” For example, in an email dated August 21, 2016, he stated, in part:

Our goal here is to show (based on network visibility) an RU Trump link. This link could be made based on the domain names that Trump owns, and the remote IPs that visited them, for example form the RU. Clearly, this is very weak link. A stronger link would be the one that shows direct email communications between a Trump domain name and a domain of Russian interest.
[. . . ]
However, if our narrative is to show that Trump has been financially active in the RU, we should not look for explicit evidence (i.e., direct communications between Trump and the RU). That looks too obvious, and I am almost certain that someone would not allowed that from within his organization. We should, perhaps, look for _indirect_ communications between Trump, a financial entity of some sort, and the links of this financial entity with Russia.

(emphasis added). In other words, the defendant’s efforts to distance Researcher-1 from the joint venture in order to shield his emails from the jury fall flat. To be sure, Researcher-1 maintained a
comparably greater degree of independence and scientific integrity than the other researchers insofar as he pushed back repeatedly against the over-stated conclusions that Tech Executive-1 and his other associates seemed intent on advancing. But his communications make plain that even though he believed the proposition being advanced in the Russian Bank-1 allegations was  unproven, he nevertheless agreed to advance the overall goals of the project that Tech Executive-1 had requested.  Accordingly, his communications are admissible. Youming Jin., 335 F. Supp. 2d at 80–81.

For the foregoing reasons, the Court should grant the Government’s Motions in Limine and permit the Government to offer the categories of evidence outlined in its Rule 404(b) notices.

1 For example, as a result of perceived pressure to please Tech Executive-1 because of his role as a data provider for the Agency-1 contract, Researcher-1 ultimately sent an email endorsing Tech Executive-1’s draft white paper that the defendant would later provide to the FBI, stating: “A DNS expert would poke several holes to this hypothesis (primarily around visibility, about which very smartly you do not talk about). That being said, I do not think even the top security (non-DNS) researchers can refute your statements. Nice!” Ind. ¶ 24(f).