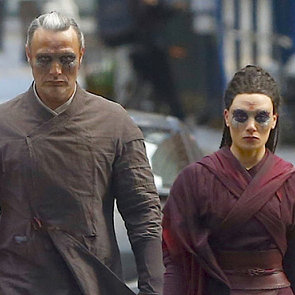 Zara Phythian who starred alongside Benedict Cumberbatch in the Marvel blockbuster Dr Strange is currently in court with her husband accused of grooming, having sex with a 13-year-old girl and filming, between 2005 – 2008, when the couple were martial arts instructors in Nottinghamshire.

The case currently being heard in Nottingham has already heard, how Phythian asked the girl if she wanted to play a game of ‘dare’ and gave her an alcoholic drink.

She then gave her husband oral sex and asked the child to join in.

The youngster copied what sports coach Phythian had been doing, the jury was told, before experienced martial arts instructor Marke allegedly had sex with both of them.

The child alleged she did not know how to react but, it is alleged, this kind of sexual activity happened repeatedly, and they told her not to say anything.

‘I knew it was wrong, but I just didn’t know how to get out of the situation or say anything,’ she told police.

‘I remember trying to copy Zara’s reaction at the time because I looked up to her and tried to be like her in every way.’

The child also felt like she was being ‘coached’ by Phythian to get better at the sexual activity, the court was told.

The victim who is now an adult, was cross questioned by Phythians barrister who said: ‘Throughout 2016, you would be aware from national media and social media posts, she (Zara Phythian) was enjoying unprecedented personal and professional success in a motion picture starring Benedict Cumberbatch.

The victim respondedshe decided it was the responsible thing to make a disclosure to police due to the job she was in.

She told the court she was dealing with two safeguarding cases at work, ‘matters which were very tough to deal with and, me personally, was taking a toll on’.

After she felt she could not cope with ‘not saying anything anymore’, she decided to say something.

Marke faces four allegations, all denied, of historic indecent assault on another woman who was 15 at the time between 2002 and 2003.

He is also jointly charged with his wife, Phythian, of 14 denied allegations of sexual activity with a different woman who was a girl at the time.