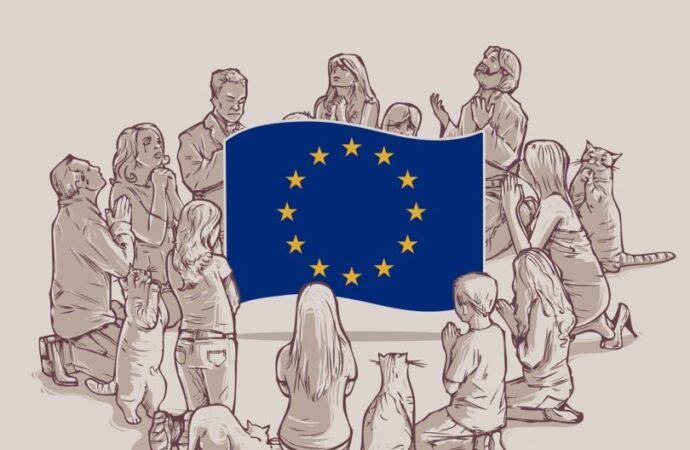 EU reaches deal on Digital Services Act for “making the internet a safer space” by requiring social media platforms to more aggressively police their platforms than ever before.

The provisional agreement reached today is subject to approval by the Council and the European Parliament.

Globalist Rules for looking at content we don’t control online.

An important step has been taken today with the provisional political agreement reached on the Digital Services Act (DSA) between the Council and the European Parliament.

In terms of ambition, the nature of the actors regulated and the innovative aspect of the supervision involved, the DSA is a world first in the field of digital regulation.

The DSA follows the principle that what is illegal offline must also be illegal online. It aims to protect the digital space against the spread of illegal content, and to ensure the protection of users’ fundamental rights.

Global Communisim moves one step closer between the communist factions of your globalist masters. Allthough above our power our patsy puppets will invent ways to punish dissedence and oversee this bold new advancement toward a digital thought police act.

Since we have interfered & made most of your common day acts subject to ridiculous bureaucratic laws that make the simplest of tasks illegal, we see no reason why this shouldn’t now move forward to the next phase of regulating the sharing of your thoughts with others

The DSA will apply to all online intermediaries providing services in the EU.

To safeguard the development of start-ups and smaller enterprises in the internal market, micro and small enterprises with under 45 million monthly active users in the EU will be exempted from certain new obligations.

People will obviously move to new platforms to avoid censorship so we need to allow these networks to grow so big tech monopolies can buy them & begin censorship programs. Failing that if they get to big we can use the new thought police act to silence your voice on them if they get to big for your boots.

In order to ensure effective and uniform implementation of requirements under the DSA, the Council and Parliament have decided to confer on the Commission exclusive power to supervise VLOPs and VLOSEs for the obligations specific to this type of actor.

They will be supervised at European level in cooperation with the member states. This new supervisory mechanism maintains the country-of-origin principle, which will continue to apply to other actors and requirements covered by the DSA.

Given the important role played by these actors in the daily lives of European consumers, the DSA will impose a duty of care on marketplaces vis-à-vis sellers who sell their products or services on their online platforms.

Marketplaces will in particular have to collect and display information on the products and services sold in order to ensure that consumers are properly informed.

The DSA introduces an obligation for very large digital platforms and services to analyse systemic risks they create and to carry out risk reduction analysis.

This analysis must be carried out every year and will enable continuous monitoring aimed at reducing risks associated with:

For online platforms and interfaces covered by the DSA, the co-legislators have agreed to prohibit misleading interfaces known as ‘dark patterns’ and practices aimed at misleading users.

Recommendation systems are found in many uses of online users, allowing them to quickly access relevant content.

Transparency requirements for the parameters of recommender systems have been introduced in order to improve information for users and any choices they make. VLOPs and VLOSEs will have to offer users a system for recommending content that is not based on their profiling.

In the context of the Russian aggression in Ukraine and the particular impact on the manipulation of online information, a new article has been added to the text introducing a crisis response mechanism.

This mechanism will be activated by the Commission on the recommendation of the board of national Digital Services Coordinators. It will make it possible to analyse the impact of the activities of VLOPs and VLOSEs on the crisis in question and decide on proportionate and effective measures to be put in place for the respect of fundamental rights.

Control what they see even if they disagree, your communist dictators will instruct you further as things evolve

Platforms accessible to minors will have to put in place special protection measures to ensure their safety online in particular when they are aware that a user is a minor. Platforms will be prohibited from presenting targeted advertising based on the use of minors’ personal data as defined in EU law.

Irrelevant as most kids lie about their age anyway but we’ll pop this in at the end to make the peasants think this stage 2 thought police act is all fluffy.

The DSA and DMA form the two pillars of unprecedented digital regulation that respects European values and the European model. Together, these acts define a framework suited to the challenges posed by the emergence of digital giants and the protection of their users, while maintaining a balance conducive to innovation in the digital economy.

A provisional political agreement between the Council and Parliament on the DMA was reached on 24 March 2022.

The provisional agreement reached today is subject to approval by the Council and the European Parliament.

From the Council’s side, the provisional political agreement is subject to approval by the Permanent Representatives Committee (Coreper), before going through the formal steps of the adoption procedure.